Not a Kid Anymore

So I’ve been reflecting on something that Hotness and I did today that was sort of the culmination of plans going back over a year. You see, when she first got pregnant with #6, Walnut, we counted the seats in our gold, ’99 Dodge Grand Caravan Sport and came up one short.

It came from the factory with six total passenger seats: one in the front, two captain chairs in the middle row, and a bench seat in the back. Try stuffing FIVE kids in that with three booster seats! But when we got pregnant again, we started thinking it might be time to get a bigger car, like a Suburban or a 12-15 passenger van.

Thereupon I began searching for vans. We didn’t feel any urgency, since Walnut wasn’t due for a while, but we were eager to find a good deal. Through digging deep into the information available, I found out that 15 passenger vans have a terrible safety record. Didn’t want Hotness driving one of those around. Nope.

So we moved on toward Suburbans. I took a few out to drive, trolling up and down I-15 between Provo and SLC to find a good deal. Nothing really panned out.

And all along, something was different. Not long ago– maybe even two or three years ago– I would have been jumping out of my skin to get this thing purchased and squared away. It would be fair to say that my eagerness to ‘square’ expenditures away and thus toss money at needs got us into some of the fascinating and unpleasant holes we’ve been digging out of for the last little while.

I’ve sometimes tried to figure out why I have been that way for so much of my life. Another interesting thing about me and money: I’ve always wanted to have some way of spending money that Hotness can’t keep track of– as if I wanted to have total control in some area– or something. In fact, I used to get uppity when quizzed on money issues, particularly when I was the lead person on finances. I even, I am ashamed to admit, would candy-coat financial hits to lessen the blow and her reaction.

I was such a dummy. Can I blame it all on having grown up in that fun, communal cult?

Now back to that search for a vehicle. A couple/few years ago, Hotness took over managing our finances. I take this moment to say that she is precisely 632,489 times better at it than me. I’m great with numbers. And I have a good work ethic (finally) and can earn money. But she does some kind of magic that gets me actually motivated to be disciplined with cash.

It has been liberating to grow up a little and cede that responsibility to her and learn to trust her implicitly. We are so much more united on finances now, and I have no odd desire to hide my spending. Unless it’s for a gift. And I get an allowance every week, which is kind of great actually. That allowance gives me freedom to spend that given amount on whatever I want until it runs out.

It is not a big allowance.

So as I’ve stopped being a sneaky kid about money and as I’ve opened the lines of communication that Hotness had been trying to connect for ages, I’ve grown in trust and admiration of her. She is capable, wise, incredibly faithful and completely trusting of our Father in Heaven. Her example has taught me to stop being immature with money and take some responsibility.

Which is the point I’m getting at. That is what was different about this process of looking for another, larger vehicle. I never felt myself getting over eager. I felt calm and able to really think hard about each candidate vehicle. I was excited to have a ‘new-to-us’ car, but that excitement was tempered by a sense of responsibility to get it exactly right and not jump the gun.

In the end, we decided to shelve the search and squeeze into the van when we all needed to get somewhere. Then a couple months later, we thought we maybe ought to look for a cheaper, smaller car– like a Corolla– and I could use that to do most of the driving, saving on gas. Hotness doesn’t like driving, so this was attractive to her.

I thought the idea was great! More freedom! More power in my hands! My own car! All those thoughts flashed, but I had no trouble getting rid of them. This had to be done right. And we took it easy, took the measure of the market, and were ready when the right opportunity arose. I drive a ’99 Corolla now.

Now we are planning a road trip for a vacation and to attend a nephew’s wedding. (Mercy, I have a nephew old enough to get married.) We’re not taking both cars, Hotness is right in refusing to let the kids roll around in a seatless van for 11 hours of driving. Inspiration struck as we considered.

“Why don’t we,” I said as the thought clarified, “look for a van bench seat for sale?” Bam, concrete idea. “Totally. If we can remove the middle captain seats and get a bench seat that will go in there, problem solved.”

We went to a local junk yard today during my lunch hour; it was a beautiful wonderland of destruction and potential. I poked around at length and finally turned up a great candidate. It was in great shape. I hauled it to the van, Hotness and I positioned it and-

$56 dollars spent and now we have a 7 passenger vehicle that fits the entire family comfortably. Here it is: 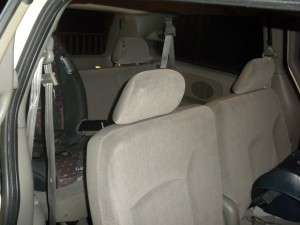 And I feel like a grown-up. Most of the time.